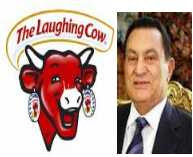 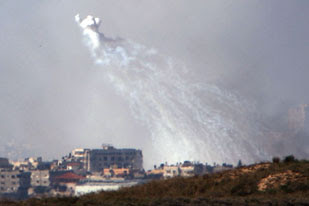 Doctors in Gaza City have told Al Jazeera that people have been admitted suffering burns consistent with the use of the controversial chemical white phosphorus.Human rights campaigners say that Israeli forces have used the munition, which can burn away human flesh to the bone, over Gaza City and Jabaliya in recent days.
Al Jazeera's Ayman Mohyeldin, reporting from the Shifa hospital in Gaza City, said: "Doctors here say they are seeing unprecedented levels of deep burns."They cannot categorically say that white phosphorus is being used, they are saying that the munitions being dropped are unprecendented."
Residents in densely-packed Jabaliya have described Israeli forces exploding shells that drop scores of burning fragments and spread suffocating smoke.
"Its the first time we see this type of weapon, it must be new and its seems like its phosphorous," one resident told Al Jazeera.
"Its suffocating and has a deadly poisonous smell that I am sure will cause a lot of sickness and disease on all of the civilians here," he said.Another witness said she saw "... a bright flash and then all of these sparks fell on our area ... landing all around us and in our homes. Our mattresses caught on fire".
Law 'violated'
The use of the munition in densely-populated areas violates the requirement under international humanitarian law for all feasible precautions to be taken to avoid civilian injury and loss of life, Human Rights Watch said।


International law permits the use of white phosphorus in order to cover troop movements and prevent enemies from using certain guided weapons.Marc Garlasco, a senior military analyst at the human rights group told Al Jazeera on Saturday that he had watched Israeli ground forces using white phosphorus.
"Clearly it is [white phosphorus], we can tell by the explosions and the tendrils that go down [and] the fires that were burning," he said."Today there were massive attacks in Jabaliya when we were there. We saw that there were numerous fires once the white phosphorus had gone in."We went by Israeli artillery units that had white phosphorus rounds with the fuses in them."
Major Avital Leibovich, an Israeli military spokeswoman, told Al Jazeera that the Israeli army was "using munitions with accordance to international law".
"The policy of the IDF [Israeli Defence Force] is to not specify the types of munition, we have not done it before and we will not do it now."
Mark Regev, the Israeli government spokesman, said he was unable to confirm or deny whether the military was using the chemical, but that Israel did not use munitions that were banned under international law."I don't have the knowledge of the detail of what ammunition we are using. I can only know for a fact that Israel uses no ammunition that is outlawed under conventions and that Nato forces would not use in a similar combat situation," he told Al Jazeera.Israel used white phosphorus during its 34-day war against Lebanon's Hezbollah movement in 2006, while the United States used it during the controversial siege of the Iraqi city of Fallujah in 2004.
Source:
Al Jazeera and agencies
Posted by newsclock at 6:13 PM 0 comments