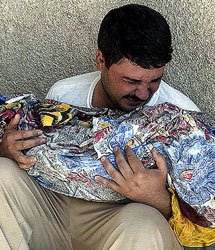 October 8, 2006 A man mourns his son Friday in Baqubah, a city north of Baghdad. The child died in random gunfire near a family home in the village of Khan Bani Saad.
(Photo: Mohammed Adnan / AP)
By David Brown
The Washington Post

A team of American and Iraqi epidemiologists estimates that 655,000 more people have died in Iraq since coalition forces arrived in March 2003 than would have died if the invasion had not occurred.
The estimate, produced by interviewing residents during a random sampling of households throughout the country, is far higher than ones produced by other groups, including Iraq's government.
It is more than 20 times the estimate of 30,000 civilian deaths that President Bush gave in a speech in December. It is more than 10 times the estimate of roughly 50,000 civilian deaths made by the British-based Iraq Body Count research group.
The surveyors said they found a steady increase in mortality since the invasion, with a steeper rise in the last year that appears to reflect a worsening of violence as reported by the U.S. military, the news media and civilian groups. In the year ending in June, the team calculated Iraq's mortality rate to be roughly four times what it was the year before the war.
Of the total 655,000 estimated "excess deaths," 601,000 resulted from violence and the rest from disease and other causes, according to the study. This is about 500 unexpected violent deaths per day throughout the country.
The survey was done by Iraqi physicians and overseen by epidemiologists at Johns Hopkins University's Bloomberg School of Public Health. The findings are being published online today by the British medical journal the Lancet.
The same group in 2004 published an estimate of roughly 100,000 deaths in the first 18 months after the invasion. That figure was much higher than expected, and was controversial. The new study estimates that about 500,000 more Iraqis, both civilian and military, have died since then - a finding likely to be equally controversial.
Both this and the earlier study are the only ones to estimate mortality in Iraq using scientific methods. The technique, called "cluster sampling," is used to estimate mortality in famines and after natural disasters.
While acknowledging that the estimate is large, the researchers believe it is sound for numerous reasons. The recent survey got the same estimate for immediate post-invasion deaths as the early survey, which gives the researchers confidence in the methods. The great majority of deaths were also substantiated by death certificates.
"We're very confident with the results," said Gilbert Burnham, a Johns Hopkins physician and epidemiologist.
A Defense Department spokesman did not comment directly on the estimate.
"The Department of Defense always regrets the loss of any innocent life in Iraq or anywhere else," said Lt. Col. Mark Ballesteros. "The coalition takes enormous precautions to prevent civilian deaths and injuries."
He added that "it would be difficult for the U.S. to precisely determine the number of civilian deaths in Iraq as a result of insurgent activity. The Iraqi Ministry of Health would be in a better position, with all of its records, to provide more accurate information on deaths in Iraq."
Ronald Waldman, an epidemiologist at Columbia University who worked at the Centers for Disease Control and Prevention for many years, called the survey method "tried and true," and added that "this is the best estimate of mortality we have."
This viewed was echoed by Sarah Leah Whitson, an official of Human Rights Watch in New York, who said, "We have no reason to question the findings or the accuracy" of the survey.
"I expect that people will be surprised by these figures," she said. "I think it is very important that, rather than questioning them, people realize there is very, very little reliable data coming out of Iraq."
The survey was conducted between May 20 and July 10 by eight Iraqi physicians organized through Mustansiriya University in Baghdad. They visited 1,849 randomly selected households that had an average of seven members each. One person in each household was asked about deaths in the 14 months before the invasion and in the period after.
The interviewers asked for death certificates 87 percent of the time; when they did, more than 90 percent of households produced certificates.
According to the survey results, Iraq's mortality rate in the year before the invasion was 5.5 deaths per 1,000 people; in the post-invasion period it was 13.3 deaths per 1,000 people per year. The difference between these rates was used to calculate "excess deaths."
Of the 629 deaths reported, 87 percent occurred after the invasion. A little more than 75 percent of the dead were men, with a greater male preponderance after the invasion. For violent post-invasion deaths, the male-to-female ratio was 10-to-1, with most victims between 15 and 44 years old.
Gunshot wounds caused 56 percent of violent deaths, with car bombs and other explosions causing 14 percent, according to the survey results. Of the violent deaths that occurred after the invasion, 31 percent were caused by coalition forces or airstrikes, the respondents said.
Burnham said that the estimate of Iraq's pre-invasion death rate - 5.5 deaths per 1,000 people - found in both of the Hopkins surveys was roughly the same estimate used by the CIA and the U.S. Census Bureau. He said he believes that attests to the accuracy of his team's results.
He thinks further evidence of the survey's robustness is that the steepness of the upward trend it found in excess deaths in the last two years is roughly the same tendency found by other groups - even though the actual numbers differ greatly.
An independent group of researchers and biostatisticians based in England produces the Iraq Body Count. It estimates that there have been 44,000 to 49,000 civilian deaths since the invasion. An Iraqi nongovernmental organization estimated 128,000 deaths between the invasion and July 2005.
The survey cost about $50,000 and was paid for by Massachusetts Institute of Technology's Center for International Studies.
Posted by newsclock at 2:20 PM 0 comments