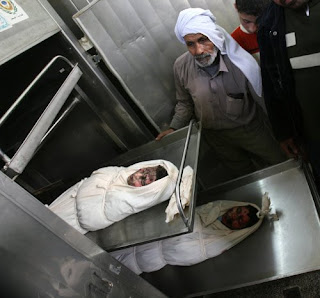 " Israel pounded Hamas-run Gaza on Thursday, killing 10 militants, five children and four civilians(…)The children, aged 8 to 12 were killed as they played in a field during an Israeli air strike around the northern town of Jabaliya, Palestinian medics said।Another 12-year-old boy died of wounds sustained in a Gaza raid the previous day, and a shepherd was killed in northern Gaza। “”" [ AFP ]
“”" Five boys playing football have been killed in Gaza by Israeli air strikes(…) At least 16 Palestinians – including the four children – were killed yesterday as Israel responded to the deadly attacks the previous day. “”" [ The Independent ]

“”" The air strikes brought the toll to more than 30 dead and more than 60 injured in two days of attacks. Israeli military continued to pound Gaza on Thursday, killing 20 Palestinians, including five children playing football. “”" [ AlJazeera ]
This the same old Israeli technique: just a few days from the inauguration of new US President, the Israelis create a new serious situation as they are sure that new US goverment will continue as their ally and ture friend.
The Palestinian helped the Jews after World War 2 and this is the return! The Israelis should find a dignity or at least focus on who killed them in the past instead? Israelis had been killed by European for years not by Palestinian।
There is an old American say"What goes around comes around"
So it's only matter of time, the Israelis will find them self alone in this world and cry for help, but God will revenge for all the Children and women were killed by the Isralis and their सेट
Tony
Tony1@newsclock.com
Posted by newsclock at 3:39 PM 0 comments 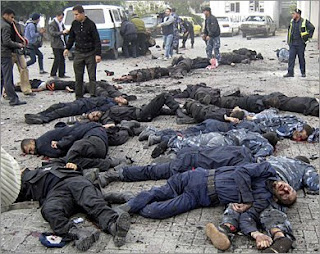 Israel in 'all-out war' with Hamas
Israel's military is in an "all-out war" with Hamas in the Gaza Strip, Ehud Barak, the defence minister, says.Palestinian medical sources say at least 345 Gazans have been killed and another 1,450 wounded in three consecutive days of Israeli bombardment in the heavily-populated territory.
"We have nothing against Gaza residents, but we are engaged in an all-out war against Hamas and its proxies," Barak said on Monday.There were also growing fears that a ground offensive was being planned after Israel declared a "closed military zone" around the Gaza Strip.
Israel says the creation of a buffer zone along the border will help protect it from rocket attacks. Civilians, including journalists, could be banned from an area between 2km and 4km deep under the policy. On previous occasions, such a move has sometimes been followed by military operations. "This operation will expand and deepen as much as needed," Barak said. "We went to war to deal a heavy blow to Hamas, to change the situation in the south."
Trapped Palestinians
Tanks and troops have been massed in the area since the attacks, referred to by the Israeli military as Operation Cast Lead, was launched on Saturday।
Al Jazeera's Ayman Mohyeldin, reporting from Gaza City, said that there was little the residents of Gaza could do to prepare for any possible ground assault.
"In a city that is so densely-populated, a ground offensive would mean urban warfare, street-to-street fighting ... leaving many Palestinians in the crossfire," he said.
"Unlike other conflict zones where there is the possibility to flee the war zone, Gaza itself has become the war zone. There is nowhere for the population to go, they are in the middle of all these attacks."Israel said it began pounding the Gaza Strip with missiles fired from warplanes and helicopter gunships in order to halt the rocket and mortar attacks by Palestinian fighters."Military officials said yesterday that this operation will go on until Hamas stops firing missiles into southern Israel," Al Jazeera's Hoda Abdel Hamid, reporting from southern Israel, said."They are also very much aware that they wouldn't really be able to stop that, but at least they will try to degrade the capability of Hamas."
Israeli justificationScores of rockets have hit southern Israel since the offensive got under way. On Monday, an Israeli Arab was killed and eight others wounded when one of the missiles hit a construction site in the city of Ashkelon.
Speaking to Al Jazeera, Tzipi Livni, the Israeli foreign minister, said the Israeli offensive was aimed at Hamas and not the Palestinian people.
"We tried to avoid this. You know that Israel accepted the truce that was initiated by the Egyptians in order to create peace and quiet. We adopted the truce. What we got in return? We got in return daily attacks, we got in return smuggling of weapons to Gaza Strip with long-range [capabilities]," she said.
Livni also appealed to Palestinian civilians to leave for safer places within the Gaza Strip and advised them against staying in places close to Hamas infrastructure.
Support for Israel came from the US, with the White House saying Hamas must halt cross-border rocket fire.
"In order for the violence to stop, Hamas must stop firing rockets into Israel and agree to respect a sustainable and durable ceasefire," Gordon Johndroe, a White House spokesman said.
Ban Ki-Moon, the UN secretary-general, meanwhile, urged Arab and world leaders to press for an end to the violence in the Gaza Strip।
Egyptian gesture
On Monday, Egyptian authorities allowed ambulances carrying several wounded Palestinians to cross into Egypt through the Rafah border crossing for medical treatment.
Hospitals in Gaza have been overwhelmed by casualties since Israel started its aerial blitz on the territory.
Egypt also allowed lorries loaded with humanitarian aid to enter its border crossing with the Gaza Strip। Lorries with food and medical supplies have been lining up outside the Egypt-Gaza border since early morning.The UN relief and works agency said on Monday that at least 51 Palestinian civilians, including women and children, were confirmed to be among those killed in the Gaza Strip.
An UNRWA spokesman said the figure, which was based on visits to hospitals and medical centres was "conservative" and "certainly rising"।Four young girls from the same family in the northern town of Jabaliya and two young boy from Rafah were among those killed in the latest raids, Palestinian medics said.Al Jazeera's Sherine Tadros said the situation at the Shifa hospital in Gaza City was chaotic as the territory's health system struggled to cope with the more than 1,400 people injured."Hundreds of people are just waiting outside ... the problem is that there simply aren't enough beds to cope with the number of injured," she said."Medical sources here are telling us they are running out of everything, from gauzes to saline solutions, and critically now they are running out of almost every type of blood."A six-month truce between Israel and Hamas in the Gaza Strip ended on December 19.
बी Aljazeera
Posted by newsclock at 3:20 PM 0 comments