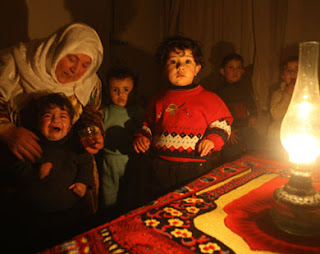 Israel repeatedly closes the crossings into Gaza in response to rocket attacks
Citizens in the Gaza Strip are bracing for more electricity blackouts after Israel cut off fuel shipments to the territory's only power plant.
Israel has closed crossings into Gaza, making it likely that electricity would be completely cut off in the territory from about 1600 GMT, Palestinian officials said.
Israel's defence ministry closed the crossings on Sunday after Palestinian fighters fired rockets into southern Israel. No one was hurt in the attack.
"More than 30 per cent of the electricity supply in the Gaza Strip could not be guaranteed this evening," Jamal al-Kudari, head of a committee campaigning to end Israeli sanctions, said on Sunday.
"Our fuel reserves are on the verge of being exhausted."
The Gaza City plant provides about a quarter of Gaza's electricity, while most of the rest comes over lines from Israel. Egypt also provides a small amount.
Fuel needed
"Right now about a third of the Gaza Strip is being effected by these [power] outages," Al Jazeera's Ayman Mohyeldin, reported from Gaza.
"The situation is getting worse by the hour ... The power generating plant here in the Gaza Strip powers about a third of the homes, business and factories in the northern part of the Strip. We're talking about five hundred thousand people that as of 6.30pm local time [16:30 GMT] will be without power."
A network of tunnel linking Gaza to Egypt is known to be used by Gazans to bypass Israel's blockade of the territory and bring products, including some fuel, into the Strip.
"That is one way the Palestinians in Gaza have been able to get by," Mohyeldin said.
"But none of the fuel that comes through the tunnels can be used to power the critical infrastructure of Gaza. There's two reasons for that - the Egyptian quality of petrol isn't high enough to power the generator, but at the same time the generator is monitored by EU observers and they will not allow any blackmarket fuel to be used to generate electricity for Gazans."
Palestinian appeal
Peter Lerner, the co-ordinator of Israeli activities in the Palestinian territories, said: "We received a request [from the Palestinians] for deliveries of fuel to resume and we forwarded the request to the defence ministry in Tel Aviv."
The Israeli defence ministry has given no indication of when fuel supplies will be renewed.
Most of the fuel and gas supplies needed by the Gaza Strip usually goes through the Nahal Oz terminal between Israel and the Palestinian territory.
Israel repeatedly closes the crossings into Gaza, derailing the Gazan economy and putting the territory's citizens under pressure, in response to rockets fired from the Strip by Palestinian fighters.
Even as the crossings were closed, there were fresh calls for the largely stagnant peace process between the Israelis and the Palestinians to be revived.
The Middle East Quartet - which groups the EU, Russia, the UN and the US - held a meeting in Egypt on Sunday and called for peace talks to be carried forward.

Source: Al Jazeera
Posted by newsclock at 8:24 AM 0 comments