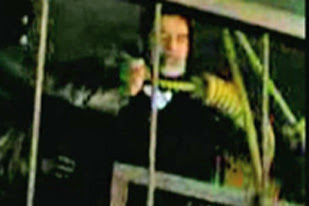 The grainy image of Saddam's execution was probably captured on a mobile phone by a witness
A new video has emerged showing Saddam Hussein, the former Iraqi president, exchanging taunts with onlookers before the gallows floor dropped away and he was hanged.
bodyVariable350="Htmlphcontrol1_lblError";
The video, first broadcast by Al Jazeera on Sunday, was captured on a mobile phone when Saddam was executed on Saturday.

Someone among the witnesses can be heard praising Muhammad Bakr al-Sadr, the founder of the Shia Dawa party and an uncle of Muqtada al-Sadr, who was executed in 1980 by Saddam.
bodyVariable300="Htmlphcontrol2_lblError";
"God damn you," a guard said.

Saddam appeared to smile at those taunting him from below the gallows. He said they were not showing manhood.

Then Saddam began reciting the Shahada, a Muslim prayer that says there is no God but God and Muhammad is his messenger, according to an unabridged copy of the video clip, which was posted on a website.

Saddam made it to midway through his second recitation of the verse. His last word was Muhammad. Then the floor dropped out of the gallows.

Najib al-Nuaimi, a member of the defence team, told Al Jazeera on Sunday that no Sunni lawyer was allowed to be among the execution witnesses and that the conduct of those present showed it was an act of revenge and for political purposes.

"This is not in the normal procedures to execute a normal person," he said.
"It's full of hatred and it's very ugly. It's nothing to do with the Dujail case."
By several accounts, Saddam was calm but scornful of his captors, engaging in a give-and-take with the crowd gathered to watch him die and insisting he was Iraq's saviour, not its tyrant and scourge.

Munir Haddad, an appeals court judge who witnessed the hanging, told the BBC: "He said we are going to heaven and our enemies will rot in hell and he also called for forgiveness and love among Iraqis but also stressed that the Iraqis should fight the Americans and the Persians."

Another witness, Mowaffak al-Rubaie, the Iraqi national security adviser, told The New York Times that one of the guards shouted at Saddam: "You have destroyed us. You have killed us. You have made us live in destitution."

Al-Rubaie told the newspaper that Saddam responded: "I have saved you from destitution and misery and destroyed your enemies, the Persians and Americans."

Saddam has been buried in Awja village, close to Tikrit.
Ali al-Nida, head of the Albu Nasir tribe, said that the burial had taken place at 4am in a family plot in the village of Saddam's birth.

It is Muslim practice to bury the dead within a day. Saddam's sons, Uday and Qusay, are buried in Awja.

Al Jazeera's correspondent Hoda Abd al-Hamid said he was buried in a remote corner, his grave covered with the Iraqi flag.

Saddam's family had hoped to bury him in Ramadi, a symbolic site, but they were prevented from doing so due to security reasons.

There is little prospect of peace from al-Qaeda in Iraq, but Nuri al-Maliki, the Iraqi prime minister, and George Bush, the US president, hope that more moderate Sunnis may now choose negotiation over violence.

Unusually, the government did not even see a need for a curfew in Baghdad.
Protests in Saddam's home town and in the mainly Sunni west were small.

Although resentful at a loss of influence, few Sunnis found much to mourn in Saddam's passing.

Many Kurds were disappointed that Saddam was not convicted of genocide against them in a trial yet to finish.

With violence killing hundreds every week, Iraqis have other worries. Celebrations in Shia cities and the Sadr City slum in Baghdad were brief and fairly restrained.

The UN, the Vatican and Washington's European allies all condemned the execution on moral grounds.
Many Muslims, especially Sunnis, making the Hajj pilgrimage to Mecca were outraged by the symbolism of hanging Saddam on the holiest day of the year at the start of Eid al-Adha - some Shia also said his death was a suitable gift from God.
After complaints of interference by Shia politicians in the trial, the speed of the execution may add to unease about the fairness of the US-sponsored process.

Barzan al-Tikriti, Saddam's half-brother, and Awad al-Bander, a former judge, will be hanged for the same crimes in January.

Sectarian violence
Al-Maliki, his fragile authority among fellow Shia significantly enhanced after he forced through Saddam's execution over Sunni and Kurdish hesitation, has reached out to Saddam's Sunni supporters

"Saddam's execution puts an end to all the pathetic gambles on a return to dictatorship," he said in a statement as state television showed him signing the death warrant in red ink.

"I urge ... followers of the ousted regime to reconsider their stance as the door is still open to anyone who has no innocent blood on his hands to help in rebuilding ... Iraq."

Source: Agencies By Aljazeera.net
Posted by newsclock at 8:37 PM 0 comments