Anger as Bush takes on Chavez 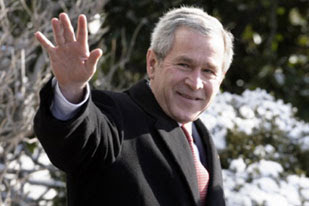 Bush's visit will take in Brazil, Uruguay,Colombia, Guatemala and Mexico
posted By Aljazeera
George Bush, the US president, is beginning a tour of Latin America - where he has been rated the worst US leader in recent memory.
Washington has lost its once undisputed economic and political influence there and the trip, which begins on Thursday in Brazil, is intended to dispel feelings that the US has been neglecting its regional neighbours.
But, as the "get out Bush" graffiti on walls in Uruguay indicates, Washington could be disappointed.
Thomas Shannon, the US assistant secretary of state, said: "The president's trip to the region gives us a great opportunity to say yet again how we are engaged in the region, to underscore our commitment to the region."
Over the last six years, while Bush ignored Latin America, many of the nations in the region turned to Hugo Chavez, Venezuela's president, for both leadership and money.
Romeo Perez Anton, a political analyst in Uruguay, told Al Jazeera: "The rhetoric, the proposals of Chavez, have finally opened the eyes of the United States, and I think this is the explanation for this diplomatic offensive."
Protests
Chavez, who has referred to Bush as "the devil", has called for protests during Bush's tour.
While the US president is in Uruguay a huge rally to repudiate the American leader's regional visit will be under way only 50km away in neighbouring Argentina with Chavez as the keynote speaker.
Demonstrators, many of them women from the Via Campesina farm workers movement, took over the Rio de Janeiro offices of Brazil's National Development Bank on Wednesday, as part of a protest.
Bush's visit will take in Brazil, Uruguay, Colombia, Guatemala and Mexico, where he will be trying to mend relations damaged by US plans to build a 1,100km fence along the US-Mexican border to keep out illegal migrants.
Latin America has been frequently criticised for a lack of unity between its states and Washington has been trying to seduce Uruguay away from Mercosur, Latin America's regional trade bloc.
Regional clout
Jose Mujica, Uruguay's minister of agriculture and once a Tupamaro guerrilla fighter, told Al Jazeera he hopes Bush's overtures towards Uruguay will give the tiny and often ignored country more clout with its neighbours.
"We depend ferociously on Brazil and Argentina but they don't depend on us. Sometimes they need to be reminded that we exist," he said.
Brazil, the first stop on Bush's trip, is the world's biggest exporter and consumer of ethanol as an alternative fuel.
It has been enthusiastic about proposals to join forces with the US and create a world wide market for ethanol.
But despite concerns over unity in Latin America, if Bush's plan is to counter the Chavez charm offensive in the region, Washington may have its work cut out.
Lula Da Silva, Brazil's president, has made it clear that his priority is just that - unity between Latin American states, which includes, rather than isolates, Venezuela.
Posted by newsclock at 2:29 PM 0 comments