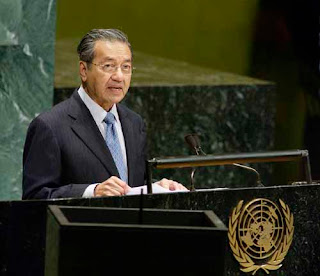 Mahathir bin Mohammad
Born in Alor Star, the capital of the northern state of Kedah, Mahathir said in his autobiography that he had Indian ancestry (from his father), with its origins tracing back to Tamil Nadu/Kerela border in India, while his mother was a Kedah-born Malay. Mahathir, however, considers himself to be a "full Malay", in line with Article 160 of the Constitution. Under Article 153 of the Constitution, Malays are granted particular rights not available to other citizens.

During World War II, he sold pisang goreng (banana fritters) to supplement his family income in the Japanese occupation of Malaya.
Mahathir first attended a Malay vernacular school before continuing his education at the Sultan Abdul Hamid College in Alor Star. Mahathir then attended the King Edward VII Medical College in Singapore, where he edited a medical student magazine called The Cauldron; he also contributed to the The Straits Times newspaper anonymously under the nickname "Che Det". Mahathir was also President of the Muslim Society in the college. In 1953, Mahathir entered the then Malayan government service as a medical officer upon graduation.

He married Dr Siti Hasmah Mohd Ali—a former classmate in college—on August 5, 1956, and left the government service in 1957 to set up his own practice in Alor Star. Mahathir's practice thrived, allowing him to own by 1959 a Pontiac Catalina and a Chinese chauffeur (at the time most chauffeurs were Malay, owing to Chinese economic dominance). Some critics have suggested this foreshadowed a later hallmark of Mahathir's politics, which focused on the "cultivation of such emblems of power".
Active in politics since 1945, beginning with his involvement in the Anti-Malayan Union Campaign, Mahathir joined the United Malays National Organization (UMNO) upon its inception in 1946. As State Party Chairman, and Chairman of the Political Committee, he inadvertently angered some quarters with his proposal that the selection of candidates be based on certain qualifications for the 1959 general election. Hurt by accusations that he was scheming to put up candidates who were strongly allied to him, Mahathir refused to take part in the national election that year.

In the third general election of 1964, Mahathir was elected Member of Parliament for Kota Setar Selatan, defeating the Pan-Malaysian Islamic Party's (PAS) candidate with a 60.2% majority. He lost the seat in the following general election in 1969 by a mere 989 votes to PAS's candidate, Haji Yusoff Rawa, after he categorically declared that he did not need Chinese votes to win. (Ironically, Mahathir won the 1999 general elections mainly due to Chinese votes, when the Malay grounds were split over his quarrels with his deputy Anwar Ibrahim.)

Following the race riots of May 13, 1969 in the May 13 Incident, Mahathir was sacked from the UMNO Supreme Council on 12 July, following his widespread distribution to the public of his letter to Tunku Abdul Rahman, the then Prime Minister. In his letter, he had criticised the manner in which the Tunku had handled the country's administration. Mahathir was subsequently relieved of his party membership on 26 September.
While in the political wilderness, Mahathir wrote his book, "The Malay Dilemma",[4] in which he sought to explain the causes of the May 13 Incident in Kuala Lumpur and the reasons for the Malays' lack of economic progress within their own country.

He then proposed a politico-economic solution in the form of "constructive protection", worked out after careful consideration of the effects of heredity and environmental factors on the Malay race. The book, published in 1970, was promptly banned by the Tunku Abdul Rahman government. However, some of the proposals in this book had been used by Tun Abdul Razak, the second Prime Minister, in his "New Economic Policy" that was principally geared towards affirmative action economic programs to address the nation's economic disparity between the Malays and the non-Malays. The ban on his book was eventually lifted after Mahathir became Prime Minister in 1981.

Mahathir rejoined UMNO on 7 March 1972, and was appointed as Senator in 1973. He relinquished the senatorship post in 1974 in order to contest in the general elections where he was returned unopposed in the constituency of Kubang Pasu, and was appointed as the Minister of Education.
In 1975, he became one of the three vice-presidents of UMNO, after winning the seat by 47 votes. Tun Hussein Onn appointed Mahathir as Deputy Prime Minister on 15 September 1978, and in a Cabinet reshuffle, appointed him concurrently as the Minister of Trade and Industry.
Mahathir became the Prime Minister of Malaysia on 10 July 1981 when Tun Hussein Onn stepped down due to health reasons. After 22 years in office, Mahathir retired on October 31, 2003, making him one of Asia's longest-serving political leaders. Upon his retirement on 31 October 2003, Mahathir was awarded a "Tun"-ship, Malaysia's highest civilian honour.
Posted By wikipedia.
Posted by newsclock at 4:20 PM 0 comments 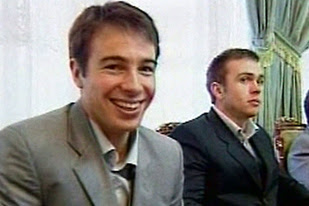 Tehran said the footage shown on Sunday refuted claims made by the soldiers two days earlier that they had been mistreated.
bodyVariable350="Htmlphcontrol1_lblError";
The crew said they had been blindfolded, isolated in cold stone cells, tricked into fearing execution, and coerced into falsely saying they had entered Iranian waters.
bodyVariable300="Htmlphcontrol2_lblError";
The video clips, which were briefly aired on Iran's state-run Arabic satellite channel Al-Alam, showed several of the sailors and marines dressed in track suits playing chess and table tennis, laughing and chatting.
Other short clips showed them watching football on television and eating at a long dining table that had vases filled with flowers on it.

The newscaster said the video proved "the sailors had complete liberty during their detention, which contradicts what the sailors declared after they arrived in Britain".

The crew reported having been under constant psychological pressure and being threatened with seven years in prison if they did not say they intruded into Iranian waters.

Lieutenant Felix Carman, one of the crew members captured on March 23, said they were rarely allowed to socialise and when they were, it was for the benefit of the Iranian media.

"We were kept in isolation until the last few nights, when we were allowed to get together for a few hours, in the full glare of the Iranian media," Carman said at a news conference on Friday.

In the video broadcast on Sunday, Carman could be seen wearing a business suit and smiling at the camera.

Iran has dismissed the sailors' news conference as propaganda.

Two days before their release, Tehran had pledged not to show more videos of the captured crew.

The 15 were captured in the Gulf on March 23 and freed last week by Mahmoud Ahmadinejad, the Iranian president, who called their release a gift to Britain.
Posted by newsclock at 11:38 PM 0 comments