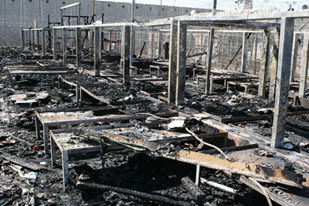 A riot in an Israeli jail that left one inmate dead has provoked an angry response from other Palestinian prisoners and sparked protests in the occupied territories. The Prisoners Club, the main group representing Palestinian prisoners, said on Tuesday that most of the nearly 10,000 security detainees held in Israel had gone on hunger strike.
bodyVariable350="Htmlphcontrol1_lblError";
"This is a one-day hunger strike to protest against what happened at Ketziot," Issa Qaraqi, a Palestinian MP, said. However, Yarona Zamir, a spokeswoman for Israel's prison service, said that although some prisoners had refused their breakfast there was not a widespread hunger strike.
bodyVariable300="Htmlphcontrol2_lblError";
Clashes broke out at the Ketziot prison in the southern Negev desert early on Monday as about 1,000 inmates attacked prison guards and torched the tents where they were being held.The guards fought back with tear gas, rubber bullets and batons. At least 15 prisoners and 15 guards were injured in the violence. 'Non-lethal weapon'The Israeli prison service said that it was a "non-lethal weapon" that had injured the prisoner who later died in hospital.It did not reveal his identity, but said he was 30-years old and serving a two-year sentence.Ashraf Ajrami, minister of prisoner affairs in the Palestinian government, said he was Mohammed al-Ashkar, a member of the Islamic Jihad group. The relatively short sentence suggested his offence must have been minor, he said. Al Jazeera's Jacky Rowland in Ramallah said the violence at the Ketziot jail had provoked protests in the West Bank and Gaza Strip as almost every Palestinian family has a relative who is, or has been, a prisoner in Israel.Another protest was planned for the West Bank town of Ramallah on Tuesday.Rowland said the timing of the incident was important coming just weeks ahead of peace talks between Israeli and Palestinian leaders in the United States."Many Palestinians are saying, look if this type of thing going on just weeks before the peace talks what does it say about the extent to which the Israelis are really dealing in goodwill," she said.'Provocative' searchThe violence broke out after guards began searching prisoners' bunks for contraband.

The Prisoners Club said that the cell searches had been "provocative".Ajrami said the security sweep violated an agreement between the prisons service and inmates barring night-time searches and appeared to be aimed at intimidating imprisoned Palestinian fighters.
"It was intended to destroy the political movement," he said. "It was intended as an oppressive act."About 2,000 Palestinians are held at Ketziot, 700 of them have never had charges brought against them. The jail is set up like a military camp, with prisoners quartered in tents rather than buildings.