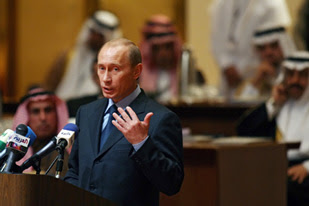 Vladimir Putin, the Russian president, has welcomed the idea of creating a gas version of the oil cartel Opec on his arrival in the gas-rich emirate of Qatar.

Putin said: "Who said that we rejected the idea of creating a gas cartel? We haven't rejected anything. I said it was an interesting proposition."
bodyVariable350="Htmlphcontrol1_lblError";
At a press conference with Qatar's emir Hamad bin Khalifa al-Thani, Putin said: "Are we going to create this cartel, do we need it? That's another discussion."

Al-Thani said he supported the discussions but was unsure whether a gas cartel would be able to command the same market control as Opec.
bodyVariable300="Htmlphcontrol2_lblError";
Putin said: "It is important for us to understand each other, to co-operate, to work on common approaches for the creation of unified conditions for consumers."

He also thanked Saudi Arabia for helping to broker the Mecca agreement between Palestinian factions Hamas and Fatah.

The Russian president arrived from Riyadh where he offered to help Saudi Arabia develop atomic energy and pledged to develop ties with the Islamic world on the first leg of a regional tour to boost military and energy ties with traditional US allies.

Putin said he would send a team of experts to a natural gas conference being held in Doha in April, where they would discuss details of building a cartel resembling the Organization of Petroleum Exporting Countries.

Qatar is an Opec member but Russia is not.

The emirate, which has the world's third largest gas reserves after Russia and Iran, is home to a pair of large US military bases, one of which houses the US command post for operations in Iraq and Afghanistan.

In January, Iran - which is developing its gas industry - said it was in favour of forming a cartel. The country's supreme leader Ayatollah Ali Khamenei proposed Iran and Russia create a gas cartel in talks with the head of Russia's security council, Igor Ivanov.

Posted by newsclock at 3:40 PM 0 comments