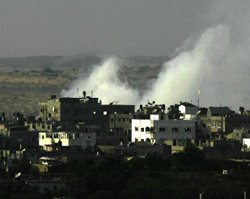 The killings took place in the northern town of Beit Hanoun
Israeli troops are reported to have killed four Palestinians in northern Gaza, two of them civilians including a 75-year-old, in one of its biggest operations in the coastal strip in months.
Witnesses said soldiers, backed by tanks and using loudspeakers, ordered all residents over 16 years of age in the town of Beit Hanoun to present themselves at a school for questioning.

The town of 30,000 people has been effectively under an army curfew since the Israeli troops entered it on Wednesday, the witnesses said.

The latest casualties bring to 13 the number of Palestinians killed since Wednesday.

Although the Israeli army says the operation was aimed partly at halting rocket fire at the Jewish state from northern Gaza, militants launched four homemade missiles at the nearby Israeli border town of Sderot, wounding one person, medical officials said.

"Residents are in panic as the sound of gunfire and explosions never stops. The curfew is very, very tight" Yamen Hamad, a local journalist
Thursday's offensive has further weakened the prospects of resuming peace talks between the two sides, already minimal since the Hamas movement took office in March after winning elections.

Hamas has said the bloodshed could also complicate Egyptian-brokered talks aimed at arranging a swap of Palestinian prisoners in Israel for an Israeli soldier abducted by militants in a cross-border raid last June.

"Residents are in panic as the sound of gunfire and explosions never stops. The curfew is very, very tight," Yamen Hamad, a local journalist, told Reuters by telephone.

One Israeli soldier was killed during the raid. More than half the Palestinians who died were said to be militants.

An Israeli army spokeswoman said all men in Beit Hanoun had been asked to gather in one place to answer questions.

Relatives said one of the civilians killed on Thursday, a 75-year-old man, was shot by troops on a rooftop when he went onto the balcony of his home to take his disabled son inside. The army said its forces were only targeting militants.

Among the dead was a Hamas gunman who worked as a bodyguard for Ismail Haniyeh, the Palestinian prime minister, witnesses said.

Hospital officials said 15 people had been wounded, including four children and a woman injured when a tank shell hit their house.

The assault is one of the biggest since Israel launched an offensive in Gaza to try to force the release of the captured soldier and halt the rocket fire.

Chavez says he wants to strengthen ties with Arab nations
Hugo Rafael Chavez Frías, the 53rd president of Venezuela, was born on July 28 1954. He came to power in 1998, promising to help Venezuela's poor majority, and was re-elected in 2000. He survived a coup in 2002 and faces a presidential election in December.
Since becoming president he has followed a policy of democratic socialism, Latin American integration and anti-imperialism.

His reforms have created much controversy in Venezuela and abroad. Most Venezuelans are split between those who say he has empowered the poor and stimulated economic growth, and those who say he is autocratic and has badly managed the economy.

Some foreign governments view Chavez as a threat to world oil prices and regional stability, while others welcome his bilateral trade and reciprocal aid agreements.

Chavez recently described George Bush, the US president, as "the devil" and says Bush has plans to assassinate him and invade Venezuela. He recently talked to Aljazeera about his relationship with the US, the Venezuelan army and why he gets only a few hours' sleep a night.

Aljazeera.net: You are strengthening ties with countries that are dissatisfied with Washington, countries such as Iran, Bolivia and Cuba. What is the end game of such an alliance?

Hugo Chavez: We are not against the US people, where there are children, women, intellectuals and students. We have investments in the US, we have eight refineries there, we have 14,000 gas stations. I have many friends there, I have played baseball there, I even have a nephew there.

What we are against is the imperial elite and that is very different. This is not a game. Do you think Iraq is a game, the aggression against Latin America for a century is a game, the toppling of Allende, the invasions of Grenada, Haiti, Panama, Jamaica, the Dominican Republic, Guatemala, is that a game?

If that's a game, then my goodness that would be awful. This is an aggression and every day more and more people are against this hegemony and trying to save the world. Look at Lebanon, the aggression against the Palestinian people, why do they do that? Because the Israelis are supported by the elite of the US. We are against that.

Some would say in order for such an alliance to stop these events and counter the power of Washington that you refer to, regional powers such as China and Russia would need to back it. You hold talks with the leaders of these countries, are they ready to come on board for such an alliance?

You insist on something that is out of my main focus. I have never said we want to build an alliance against the US, so your question is not really focused.

If you take Moscow, Iran, Vietnam, China, Malaysia, what we are doing is getting closer through integration, through energy, oil, gas, trade and respect for international law.

We are today on a campaign around the world asking for support for Venezuela to become part of the Security Council as a non–permanent member. The US is in a terrible campaign to prevent us being elected. We are defending our interests but we are not proposing an alliance against anyone, much less the people of the United States. So your question is out of focus.

In May 2005, you called for an alliance between Latin America and the Arab world. How far has that initiative gone?

Not only me, Lula [Brazil's president] has been outspoken in calling for the coming together of Latin America and the Arab countries.

In Brasilia in May we had the first ever Arab-South American summit. It was a very important meeting.

In the past, only Venezuela had strong relations with the Arab world through Opec and through links with other non-Opec countries such as Egypt.

But now Lula is convening these meetings, he is coming to the Arab world. Not long ago in Venezuela we held a meeting between senior ministers in charge of education and social matters in both Latin America and the Arab world. We have made serious progress. It is not just an individual proposal of Hugo Chavez, it is a proposal of leaders like Muammar al-Qadhafi and the amir of Qatar. As well as Lula and Eva Morales [Bolivia's president]. And we want to get our two regions together.

You have started an ambitious programme to rebuild your military, you are buying new weapons, you are trying to raise, I think, the largest standing army in the Americas. If everything goes to plan, you will have two million reserve troops. What has prompted this military build up?

Let me tell you something. I hardly have time to sleep a few hours a day, but I don't care because I've decided to devote my life to taking my people out of poverty and misery.

To make a great effort for all Venezuelans to have access to education, health, housing, to life. When we were elected, poverty in Venezuela was over 55 per cent based on UN figures, it is now between 30 per cent and 40 per cent.

We are building a system of Bolivarian schools where children can have breakfast, lunch and dinner, gain internet access and take part in sports activities.

I devote a tiny part of my time to being commander-in-chief of the Venezuelan army. The imperialists have threatened to invade Venezuela, they have already conducted a coup d'etat four years ago. Recently they conducted manoeuvres in the Caribbean. We have even captured US soldiers taking pictures of military installations and we have expelled them.

We have much evidence, proof and documents that show there is a plan to invade Venezuela. What do you want us to do? That I forget my task of minimum defence of the country?

We had old rifles, they were 60-years old. We depended almost totally on US supplies. The F16 fighters we bought 20 years ago, they refused to give us spare parts, and they were stranded on the ground. So I have bought better planes and Kalashnikovs from Moscow. We have a vast border with Colombia, we have a huge coastal line along the Caribbean. We have to defend this country. We are not going to be aggressors.

Do you feel you are still being targeted and threatened by the US? We know that some people in the US have spoken in the past about assassinating you. Do you still feel personally targeted by the US?

Yes indeed. People have publicly called for my assassination and that is a crime. However, this person is not in jail, he is a close friend of the US president.

Venezuelan terrorists who left for the US after the 2002 coup, who killed people in Venezuela, are today living in the US. The US will not extradite them. Some of them are organising actions against myself and Venezuela.

The US is protecting terrorism. They are applying state terror. President Bush has left a measure taken by a former president that authorises the CIA, like 007, with a permit to kill whoever, whenever and however. They have a green light. President Carter banned that practice and the current president has just reinstated it. I am one of the targets, no doubt about it.

If the opposition parties do take part in the forthcoming Venezuelan presidential elections will you make a move towards presidency for life?

There is no way I can adopt such a provision. We have a constitution and it is only the people who might change the constitution in this direction or any other direction. They have the power to hold a referendum to remove the power given to me. The people can collect and gather signatures to ask for a referendum to recall a government official and that is totally democratic
By Aljazeera.net
Posted by newsclock at 11:09 AM 0 comments