Escape from UK-run prison in Iraq 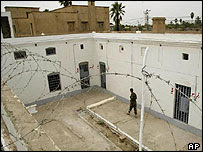 The inmates escaped from a British military prison
Posted by BBC
Eleven detainees have escaped from a British military prison in southern Iraq, the British Army has said.
Ten of them had "swapped" places with visitors over the past week, an Army spokesman said.
Their disappearance from the Shuaiba military base, west of the southern city of Basra, was only noticed on Friday.
It was not immediately clear when or how the prisoners escaped. The prisoners had been held for two years.
UK military spokesman Major David Gell confirmed that there had been an escape but gave few details.
"We are aware of the incident and it is now under investigation. We will make a statement soon," he told the AFP news agency.
A security source told the agency that the prisoners had been held without charge for the past two years.
BBC defence correspondent Paul Wood, who is in Basra with the British Army, described it as "a very embarrassing incident" for the army.
He said: "It does not speak of very tight security given that the British Army says these people were considered to pose a threat to the security of Iraq and to the multi-national forces."
Thousands of Iraqis are held in US and British-run prisons across Iraq for security reasons
Posted by newsclock at 9:04 AM 0 comments

Hillier has ‘no regrets' over detainees 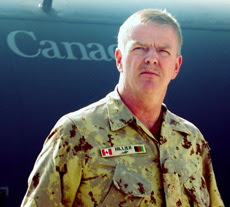 General Rick Hillier, the chief of defence staff, during an earlier visit to Kandahar. (Les Perreaux/CP)


Posted by Globe and Mail Update in Canada (JOE FRIESEN )

KANDAHAR — General Rick Hillier says he has no regrets about signing an agreement with the government of Afghanistan relinquishing the right to monitor the treatment of detainees.
“We think the agreement was pretty solid,” Gen. Hillier said. “We perhaps have improved it with this latest initiative, which really formalizes something which was informal and if we see an opportunity to do better ahead we will.”
Defence Minister Gordon O'Connor recently announced that Canada has asked the Afghan Independent Human Rights Commission to monitor detainees handed over to Afghan authorities. Unlike Britain and the Netherlands, Canada did not retain the right to verify that detainees transferred to Afghan custody are being properly treated.
Mr. O'Connor planned to meet with Abdul Qadar Noorzai, head of the human rights commission, in Kandahar today, but meeting fell through because Mr. Noorzai was unavailable.

Mr. O'Connor said Sunday that he wanted to look Mr. Noorzai in the eye to confirm his group are “going to do what they say they're going to do.”
It's not known whether the meeting will be rescheduled.
Speaking to reporters after arriving at Kandahar airfield Monday morning, Gen. Hiller, the Chief of Defence Staff, also said the Afghan war is winnable, and that Canada can meet its troop commitments through 2009 and beyond.
“Over all, there is a growing feel that the Taliban can be put back, constrained, minimized, and diminished constantly. You're not going to do it all at once, and it's still going to take a lot of effort, but this thing is winnable,” he said.
“The Taliban is a robust force. They're a force you don't want to take lightly. At the same time they're not 10 feet tall. They took a significant body blow last fall” in Operation Medusa. He said that as time goes by, the value of Operation Medusa, and its impact on the Taliban, will become apparent.
Gen. Hillier said the Afghan mission is not putting undue strain on military resources. Canada has the capacity to keep between 2,000 and 3,000 troops out of the country, as it has done for several decades, he said.
“We've got the resources to complete this mission through to February, 2009, without question,” he said.
He also said that some soldiers will have to return for second tours of duty in Afghanistan, although the priority remains to expose as many troops as possible to a combat theatre.
“Many of our soldiers, after I talked about trying to reduce the numbers of those returning, many of the soldiers come to me constantly and say, ‘Sir, we don't like that policy,” he said. “We are going to use some people for repeat tours. That's a good thing.”
Posted by newsclock at 10:02 AM 0 comments