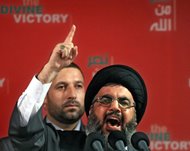 
Speaking at a victory rally in south Beirut in his first public appearance since the war with Israel, Hezbollah leader Sheikh Hassan Nasrallah said his group still had over 20,000 rockets available.
Nasrallah joined hundreds of thousands of Hezbollah supporters who filled the devastated southern suburbs of Beirut on Friday with a sea of yellow flags to celebrate "divine victory" in their month-long war against Israel.
"The resistance today has more than 20,000 rockets. The resistance is today stronger than on July 12 [the outbreak of the hostiltities] ... and stronger than ever before," he said.
One of Israel's stated aims in the offensive was to eliminate Hezbollah's capacity to fire rockets, thousands of which were fired at the country during the conflict.
Nasrallah last appeared in public at a news conference on July 12 when he announced the capture of two Israeli soldiers by Hezbollah fighters, an act which led to the Israeli attacks.
The assembled crowd, which Hezbollah's Al-Manar television said was in the hundreds of thousands, was swollen by Amal supporters waving the green flags of the sometime rival but more recently allied movement.
Supporters arrived from across Lebanon, with many setting off for the capital on Thursday by car and on foot from Shia villages in the south of the country, an area badly damaged in the Israeli offensive.
No weapon handover
Nasrallah said his fighters will give up their weapons only when "Israel's threats" end and the Lebanese government is strong enough to protect the country.
"We will not give up our arms in a weak Lebanese state incapable of defending itself from the threat of Israel," Aljazeera quoted him as saying on Friday.
"There is no army in the world that can [force us] to drop our weapons from our hands, from our grip.
Friday's rally was supposed tocoincide with Israel's full pulloul"We will not release the two captured Israeli soldiers except in an exchange for Lebanese prisoners.
"We do not want to keep our arms for ever. We do not say that our arms are forever, and this is not logical. It has to end.
"But any word on disarming the resistance under this state, this authority, this regime and this current situation means keeping Lebanon under the risk of having Israel killing and bombarding at will."
'Strong, just state'
Aljazeera further quoted Nasrallah as saying "let us build a strong and just state", and calling for a new Lebanese government of national union.
"We are sticking to and calling for establishing a state but we will never let anyone to insult us.
"The time of victory has begun and the time of defeats has gone."
The Hezbollah chief strongly criticised, albeit indirectly, the anti-Syrian Druze leader Walid Jumblatt, who is a key government ally, and demanded that he apologise for his past statements.
Festive atmosphere
Fouad Siniora, Lebanon's prime minister, was absent from the event and Aljazeera's Beirut correspondent said many people shouted anti-Siniora slogans, urging him to resign.
The atmosphere at the rally was said to be happy and festive.
Muhammed Hajj Hussein, 50, said: "Today is a holiday for Lebanon and I have never felt more happy. I am very happy for the victory of the resistance."
Hasan Slyman said: "This is a victory for Lebanon and the Islamic world. I'm very proud and hope the international community will now act against Israeli violations and incursions into our airspace."
Ali Sahhar said: "Everyone thought the Israeli army was unbeatable, this wasn't true and today we are declaring the victory the resistance achieved."
Long walk
The rally had been expected to coincide with the final withdrawal of Israeli soldiers from southern Lebanon, but Israel's army chief said on Wednesday there were "a few issues to be wrapped up" before the pullout could be completed.
Israeli forces have been gradually pulling out from territory they captured in fighting which killed nearly 1,200 people in Lebanon, mostly civilians, and 157 Israelis.
Hezbollah has declared victory in the war, during which it fired nearly 4,000 rockets into northern Israel.Border patrolEarlier, Nasrallah said on the group's Al-Manar Television: "I call on you all to participate in a victory rally, your victory ... in the southern suburb, the suburb of honour, glory, faith, steadfastness and victory for the whole country.
"Let us renew our covenant and declare our joy at the divine victory to the whole world."
Lebanese youths wave flags in support of HezbollahUnder the terms of a truce which ended the fighting last month, UN and Lebanese army forces are deploying in the south to monitor the ceasefire and try to assert the authority of the Beirut government.
But Nasrallah has said his fighters remain on the border with Israel and Hezbollah has dismissed demands that it disarm.
Earlier, Ehud Olmert, the Israeli prime minister, declined to say if the Hezbollah leader would be attacked if he appeared at the rally.
"And you think, that if he was, I would tell you - and tell him?" he told Israel's Channel 10 television on Thursday. 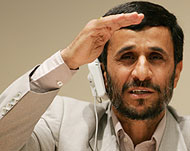 The Iranian president has said the country would be prepared to suspend some of its nuclear activities if negotiations take place "under fair conditions".
Mahmoud Ahmadinejad told a UN news conference in New York that talks with the European Union on Iran's nuclear programme were on the right track.
In the most explicit indication by the Iranian leader that Tehran is seriously considering complying with the key condition for broader talks on the issue, he said: "We have said that under fair conditions and just conditions we will negotiate about it."
In an apparent reference to the US, he said: "We believe those negotiations are moving on the right path. Hopefully others will not disrupt the work."
'No bomb'
Repeatedly questioned about the programme that Washington and its allies say hides efforts to build a nuclear weapon, Ahmadinejad said: "The bottom line is, we do not need a bomb, not like what others think."
He later added: "We are not seeking a nuclear bomb, let me make that clear."
The Iranian leader spoke during his three-day visit to New York to address the UN General Assembly where he also defended his country's uranium enrichment and attacked US policy.
Iran ignored a UN Security Council demand that it suspend uranium enrichment by August 31.
According to diplomats, the US and its European allies have decided to give Iran until early October to make progress in nuclear talks before they start discussing UN sanctions against Tehran.
Guarantees
Britain, France and Germany drew up a package of economic and political incentives hoping to persuade Iran to give up uranium enrichment. But Iran has not given a firm response.
Margaret Beckett, the British foreign secretary, said on Wednesday: "What we are looking for is a clear and concrete signal that Iran wishes to negotiate.
"If things drag on as they have been, then there are concerns and consequences about how that can continue."
Regarding the documents and access to nuclear facilities that Iran has already given the International Atomic Energy Agency, Ahmadinejad said: "I am at a loss in understanding what else we need to do to provide guarantees."

U.S. Rep. Tom Tancredo wrote a letter to Pope Benedict XVI today, asking him to resist calls to apologize for his recent remarks about Islam that offended many Muslims around the world.
"It is not surprising that your statements prompted such a visceral reaction in much of the Islamic world, where the free exercise of religion is largely proscribed," said Tancredo, R-Littleton, in his letter.
"Whether we want to admit it or not, the western world is locked in a struggle against radical Islam whose practitioners and adherents are inextricably linked to terrorism."
In a Sept. 12 address in Germany, the pope quoted a Byzantine emperor who centuries ago described some teachings of the Prophet Muhammad as "evil and inhuman." The remarks were denounced across the Islamic world and by some U.S. Muslims.
The pontiff has since said that he did not mean to give offense to Muslims or their faith, but he has not directly apologized as asked by some Muslim leaders.
Tancredo, who was raised a Roman Catholic, now attends Cherry Hills Community Church in Highlands Ranch when he's not in Washington.