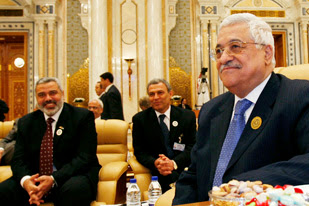 The plan, put forward after an Arab League summit in Saudi Arabia, offers Israel full diplomatic ties if it withdraws from all land seized in the 1967 war, allows the creation of a Palestinian state and the return of Palestinian refugees.
bodyVariable350="Htmlphcontrol1_lblError";
Amr Moussa, the league's secretary general, read out a "Riyadh Declaration" reaffirming its commitment to an initiative offered in 2002.

The declaration "affirms a just and comprehensive peace ... based on the principles and resolutions of international legitimacy and the land-for-peace formula".
bodyVariable300="Htmlphcontrol2_lblError";
Mahmoud Abbas, the Palestinian president, urged Israel "not to miss another chance" to resolve the Israeli-Palestinian conflict and to accept the revived plan.

"I reiterate the sincerity of the Palestinian will in extending the hand of peace to the Israeli people." 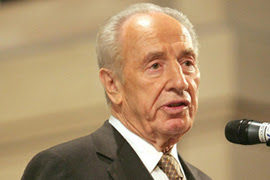 However, Shimon Peres, the Israeli deputy prime minister, rejected the initiative and said talks were needed on any final peace deal.
"There is only one way to overcome our differences, and that is negotiation," he told Israel radio.

Prince Saud al-Faisal, the Saudi foreign minister, said the Israel rejection was not suprising.
"This has always been its approach. Whenever the Arabs come up with resolutions ... [offering] peace, they reject them categorically," he said.
Refugee issue
One obstacle is the the right of return of the Palestinians who fled or were driven from their homes during the creation of Israel in 1948, and of their descendants.
However, the Riyadh Declaration makes no direct mention of the refugee issue and the 2002 plan calls only for a "just solution" to the problem.

Jacky Rowland, Al Jazeera's Jerusalem correspondent, said that Israel might see room for manoeuvre in this.

"Israel will be looking for any signs that the Arab League has toned down the 2002 plan - most notably on the right of return for refugees."

In their closing statement, Arab leaders also warned of a threat of a nuclear arms race in the Middle East, seen as refering to Israel and Iran.

The leaders called for greater co-operation among Arab nations to develop their own peaceful nuclear energy programmes.

Many Arab states share Western concerns that Iran is developing nuclear weapons and are worried about its growing influence in the region's main hotspots - Iraq, Lebanon and the Palestinian territories.
Posted by newsclock at 4:59 PM 0 comments