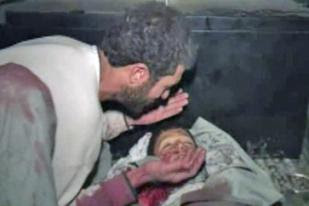 posted by Aljazeera.net
A funeral has been held for a 12-year-old boy shot dead by British soldiers while he was travelling in a car with his family.

Nato officials have told Al Jazeera they "deeply regretted the loss of life" and had launched an investigation into the incident in the capital Kabul on Thursday.
British troops opened fire on the car as the boy and his family were driving home from a family gathering, James Bays, Al Jazeera's correspondent in Afghanistan, said.

Cradling the body of his dead son, the boy's father, Zemarai, said: "They killed my son - I can never get him back."

Zemarai said he was driving seven of his relatives home and was several hundreds metres away from the soldiers' vehicles when they opened fire.
Speaking from his home before the burial of his son Zaryalai on Friday, he said: "All of a sudden they opened fire at our vehicle.

"The first three bullets hit my car and the fourth one hit my 12-year old son in the side of his head."

The Afghan interior ministry said Nato troops had opened fire on a minivan "which apparently tried to overtake the troops or maybe the car was too close to the troops".

Zemarai has denied trying to overtake the convoy and said he was unaware of any warning shots.

Bays said he later counted four bullet holes in the bodywork of the damaged vehicle.

"The boy is the latest innocent victim of a Nato mistake and his father has said he would join the Taliban or any other group that would force foreign troops from his country," Bays said.

He said: "We've had this sort of problem all over Afghanistan.

"I hope the Afghan government deal with this seriously."

Bays said the police chief was later threatened with dismissal for speaking out over the killing.

A child was also hit and killed by a Nato vehicle in a convoy in the eastern province of Khost after he ran out from the side of the road, Isaf said in a statement late on Thursday.
Posted by newsclock at 11:13 AM 0 comments