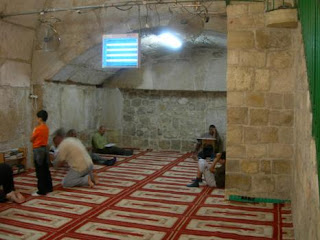 Inside of Al-Buraq mosque
Posted by www.jerusalemites.org

the false Zionist allegations in regard to Palestine.

The study highlights the cultural and religious importance of the City of Al Quds (Jerusalem) and shows the falsehood of the Zionist religious claims and anthropological fabrications.

The study gives a historical account of the Jews from the days of the Temple of Solomon, which was destroyed in 586 B.C. through their persecution under the Roman rule to the and the occupation of Al Quds in the 20th century and the immergence of the Guardians of Temple Mount Movement.

The study also underlines that Al Aqsa Mosque was built over more than a thousand years before Solomon, giving evidences that refutes the Zionist allegations that the Mosque was constructed on the ruins of Solomon’s Temple. It also shows that Al Buraq Wall, at the Western boundary of Al Haram Al Sharif (the holy Sanctuary), is sacred to Muslims because they believe that it was the place that Messenger of Allah Muhammad (may peace be upon him) had honoured and blessed by tying Al Buraq (a riding animal) to the wall, during Night Journey and Nocturnal Ascent (Isra Wa Al Mi'raj) and this Wall is an integral part of Al Haram Al Sharif.

The study explained in detail the stages of the conflict over the Wall, supported by the

documents that shows the falsity of the Zionist allegations. It also gives an account of the

and Al Aqsa Mosque and Al Buraq Wall in particular, all of which demonstrate that the

Zionist alleged rights to the Wall are simply baseless.
Posted by newsclock at 1:06 PM 0 comments