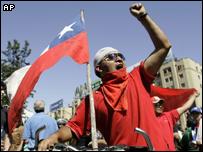 Supporters and opponents of Gen Pinochet took to the streets

Strong passions sparked off by the death of the former Chilean military ruler Augusto Pinochet are evident in the pages of the Chilean press.
Comments range from satisfaction to sadness, with some pointing to the fact that Pinochet died on human rights day.
La Tercera publishes scathing remarks by the president of the Families of The Detained and Disappeared Group, Lorena Pizarro.
"Do you know how people feel today in this country? That the worst scum that this fatherland has given birth to has died", she is quoted as saying.
Ms Pizarro says it is symbolic that Pinochet died on human rights day.

"How wise is history, Pinochet died on 10 December, so perhaps the whole of humanity said enough is enough", she says.
The coincidence was also highlighted by the popular paper La Cuarta, with its headline "Pinochet died on human rights day".
It reports that his death coincided with the 84th birthday of his wife.
'Fervour'
La Cuarta also reports on the polarized reactions to the announcement of the death.
It notes both "the fervour of his supporters who yelled for flags to be flown at half mast" and "the hundreds of families waving flags celebrating his death in the area of La Victoria".
For La Hora, "there is no middle ground with Pinochet - you either love him or hate him".
"The light and dark of an historic day," runs a headline in the paper. "No sooner had the death of Augusto Pinochet been announced than his supporters and opponents took to the streets to give vent to their emotions".

An editorial in La Tercera says the death marks "the disappearance of the principle figure in Chilean politics for at least the past three decades".
"But he and his regime are, lamentably, destined to continue causing controversy for a long time to come."
A letter in the paper says: "We Christian Democrats who defend the dignity of the human being find it unacceptable to celebrate the death of a person, whatever their crimes."
'Figure from the past'
And a political commentator in the same paper argues that "most people saw Pinochet as a figure from the past".
"I hope these people, both supporters and adversaries, can start looking towards the future rather than back to the past."
A headline in the major conservative daily El Mercurio proclaims "Profound impact in Chile and the world: Pinochet dies."
An El Mercurio editorial speaks of the "deep hatred which divided Chilean society" and argues that Pinochet acted to "bring an end to the gravest crisis in Chile in the last century, an insoluble crisis".
It says the debate over Pinochet's heritage will continue for many years but makes a plea for "reconciliation" between "all who fought from different perspectives to forge a better Chile".
BBC Monitoring selects and translates news from radio, television, press, news agencies and the internet from 150 countries in more than 70 languages. It is based in Caversham, UK, and has several bureaux abroad.
Posted By www.BBC.co.uk
Posted by newsclock at 10:28 AM 0 comments