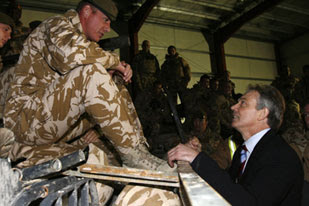 Tony Blair, the British prime minister, has been the US' main ally during the war in Iraq [Reuters]
Posted by aljazeera.net
Denmark has announced that it will pull all of its troops out of Iraq in August, as Britain unveiled a plan to scale down its forces in the country.

Tony Blair, the British prime minister, announced on Wednesday that troops numbers in southern Iraq would be cut by 1,600 to 5,500 in "the coming months.
bodyVariable350="Htmlphcontrol1_lblError";
About 450 Danish troops are stationed in southern Iraq under British command.

They will be replaced by a unit of nine soldiers manning four observational helicopters, Anders Fogh Rasmussen, the Danish prime minister, said on Wednesday.
bodyVariable300="Htmlphcontrol2_lblError";
Currently Britain has about 7,100 troops stationed in around Basra.

The British force is the second-largest foreign contingent of soldiers after that of the United States, which has more than 140,000 troops in Iraq.

Josh Rushing, Al Jazeera's military analyst, said the British move could cause problems for the Bush administration which is trying to argue for an escalation in US troops in Iraq when its main ally seems to be pulling out.

He said on Tuesday that an announcement of a troop withdrawal by Blair would make the argument in Washington for what is being called a "troop surge" much more difficult to maintain.

"What was once called the coalition of the willing, was really just the US and Britain – and now Britain seem to be pulling out," he said.

Washington is planning to send some extra 21,000 troops into Iraq in addition to the 138,000 already there, in a last-ditch effort to restore security in the country.

Gordon Johndroe, a spokesman for the Bush's administration's National Security Council, however played down British plans, saying that Blair had informed Bush of his plans to withdraw troops on Tuesday morning.

He suggested that Blair's move was a signal of increasing stability in Iraq.

"President Bush sees this as a sign of success and what is possible for us once we help the Iraqis deal with the sectarian violence in Baghdad," Johndroe said.
"While the United Kingdom is maintaining a robust force in southern Iraq, we're pleased that conditions in Basra have improved sufficiently that they are able to transition more control to the Iraqis."

He added: "The United States shares the same goal of turning responsibility over to the Iraqi Security Forces and reducing the number of American troops in Iraq."

Colonel Bob Stewart, the former commander of British forces in Bosnia, said that while Iraqi troops might soon replace British troops on the streets of Basra, the UK's involvement in southern Iraq was far from at an end.

"The British have decided that in order to get out the precondition is that the 10th Iraqi Army division must be good enough, so they have put an enormous amount of time and effort into training them," he told Al Jazeera."The British have always wanted to get out ... but they'll be putting a masssive effort into continuing the training and the training will continue I expect long after the British soldiers have come of the Iraqi streets."The British can't withdraw until they feel the Iraqi armed forces are in a position to do the job without support."
Posted by newsclock at 9:08 AM 0 comments