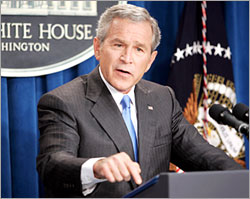 Pressure is growing on Bush over the worsening situation in Iraq

The US president has for the first time acknowledged a possible parallel between the raging violence in Iraq and the Vietnam War.
George Bush on Wednesday was asked in an ABC News interview if he agreed with a New York Times columnist's comparison of the strife in Iraq with the Tet Offensive, which is considered a key turning point in the US war in Vietnam.
"He could be right," he said. "There's certainly a stepped up level of violence."
Bush said insurgents are trying "to inflict enough damage that we'd leave."
"First of all, al-Qaeda is still very active in Iraq. They are dangerous. They are lethal. They are trying to not only kill American troops, but they're trying to foment sectarian violence," he said.
"They believe that if they can create enough chaos, the American people will grow sick and tired of the Iraqi effort and will cause (the) government to withdraw," Bush said.
Vietnamese campaign
The Tet Offensive, a campaign launched by the North Vietnamese in early 1968, was considered a military defeat for them, but the scope of the assault shocked Americans and helped turn US public opinion against the war.
The White House later sought to put the comparison in context.
"The full context was that the comparison was about the propaganda waged in the Tet Offensive ... and the president was reiterating something he's said before - that the enemy is trying to shake our will," Dana Perino, a Bush spokeswoman, said in a statement.
"The president also believes the American people understand the importance of beating our enemy who is determined to kill innocent freedom-loving people"
Dana Perino, White House spokeswoman
"They know that we're a caring and compassionate people and that we're deeply affected by gross violence," she said.
"The president also believes the American people understand the importance of beating our enemy who is determined to kill innocent freedom-loving people."
In the television interview, the US leader also expressed support for Nuri al-Maliki, the Iraqi prime minister, but warned that his patience is not infinite.
"In my judgment, Maliki has got what it takes to lead a unity government," Bush said.
"I'm patient. I'm not patient forever. And I'm not patient with dawdling. But I recognise the degree of difficulty of the task, and therefore, say to the American people, we won't cut and run," he said.
By www.Aljazeera.net
Posted by newsclock at 10:38 AM 0 comments