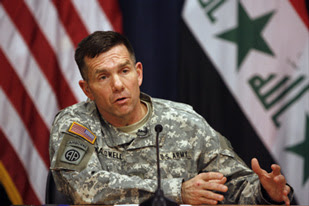 Major General William Caldwell said the whereabouts of three US soldiers was unknown
Posted by Aljazeera.net
Five US soldiers were killed and three went missing when their unit was attacked south of Baghdad, the US military has said.

The attack on a patrol of seven US soldiers and an Iraqi interpreter occured early on Saturday morning.
bodyVariable350="Htmlphcontrol1_lblError";
The US military said the attack took place at 4:44am near Mahmudiya, about 30km south of the capital.
Mahmudiya is a stronghold of Sunni Arab fighters opposed to the US-backed government in Iraq.
bodyVariable300="Htmlphcontrol2_lblError";
Troops who arrived later found five of the soldiers dead and the other three remained missing, according to a statement from Major-General William Caldwell, the chief US military spokesman in Iraq.
"The quick reaction force reported finding five members of the team killed in action and three others whose duty status and whereabouts are unknown," Caldwell said.
Search operations
The military refused to specify whether the Iraqi interpreter was among those killed or among the missing, citing security reasons.
Soldiers were searching for the missing, using drone planes and jets and setting up checkpoints throughout the area.
Soldiers were also trying to enlist support from local leaders for information.
Caldwell said: "Make no mistake: We will never stop looking for our soldiers until their status is definitively determined, and we continue to pray for their safe return."
The attack occurred nearly a year after two American soldiers went missing following a June 16 attack in the same area, prompting a massive search. Their bodies were found tied together with a bomb between one victim's legs several days later.
Two other US soldiers remain missing in action from the current conflict, including Sergeant Matt Maupin, of Batavia, Ohio, missing since April 2004 and Ahmed Qusai al-Taayie, a 41-year-old Iraqi-born reserve soldier from Ann Arbor, Michigan, who was abducted while visiting his Iraqi wife on October 23 in Baghdad.
Posted by newsclock at 12:42 PM 0 comments

The British vampire is resigning 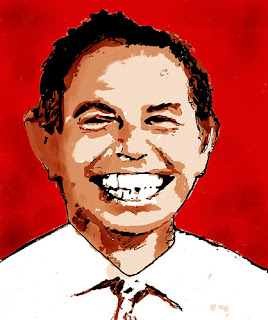 The British vampire is resigning

Today the beginning of the end of Tony Blair the war vampire
The Guardian newspaper said British Prime Minister Tony Blair will announce his resignation today, Thursday, the leadership of the Labor Party in the same room, which was inaugurated by the start of a campaign leading to the party on June 11, 1994
The newspaper added that Blair would end the curtain on his leadership at the center, which the heirs of John Smith, he was able to achieve the success story electoral what has become known as the new Labor party.
So the British vampire is leaving the office after Killing more than 650,000 of Iraqi people under the name of freedom and fighting against terror. (do they think we are stupid maybe)
Tony
NewsClock.com
Posted by newsclock at 8:21 AM 0 comments 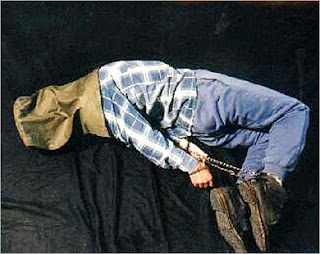 Posted by aljazeera.net in Arabic and translated to English by NewsClock.com
Two Human right organizations in Haifa revealed that Israel is cruel torture against Palestinian prisoners and detainees brushing aside international instruments। She said the B'tselem human rights in the Palestinian territories and the status of individual rights in a joint report that today, Sunday, the Israeli General Security Service (Shabak) has torturing Palestinian detainees in ways that do not humane and multi-through investigation. According to the report, which is based certificates for 73 Palestinian prisoners in the period between July 2005 and March 2006 that 96% of the detainees were subjected to closer grasp for long periods in painful and that 64% of them had received threats and insults, cruel campus with 45% of sleep and hunger of 73%. In most cases - report adds-Chabak pursue ways to spare the captive from the outside world and the isolation of a few days of investigation and arrest humiliating conditions amid beatings and psychological pressure. It describes the Israeli investigators linking hands and legs detainee seat metal sorely deprived for a long period during which to eat and sleep in order to break his spirit, pointing out that "the pursuit of these roads are under the guidance of the Israeli government, fixed and ratification by officials and sponsored by the law."

To prove the government involvement with the Chabak in the torture of Palestinian detainees, the report pointed to a 500 complaints filed against the Chabak since 2001, pointing out that not even one single criminal investigation was opened. He added : "We have been mandated Shabak, a former investigator to look into complaints against the investigators, has decided that in the majority of cases the complaints uncertified In some few instances in which he affirmed that torture was behalf State closed the file based on tendentious interpretations." Five hundred complaints were filed against Chabak not investigated any of them (Jazeera Net) cells bleak In Israeli report said the detainee "t" in his testimony that the investigators threatened to arrest his family and evaded the demolition of his home draw with the detainee "M.. H "(37 years), they threatened to arrest his wife and his eldest daughter, and told him that they had ways of achieving, especially with ladies amid hints of the means of achieving sustainability sexual nature. The detainee also said "p. P "(24 years) - According to the report - that the investigator returned to the interrogation room after an hour of departure and told him that investigators were raped his wife pointing out its intention to open the area to watch himself. The report pointed out that investigations Chabak with the Palestinian detainees spread over very long hours and placed in solitary unclean and closed the Bulblet Dimly illuminated 24 hours a day would lead to the loss of the ability to set the time for pointing out boom phenomenon deprive detainee from meeting with his lawyer. The report pointed out that torture is a formal endorsement (Jazeera Net) of guarding the guards? He noted the B'Tselem report, the Center for the rights of the individual that Israeli High Court of Justice had in 1999 imposed significant restrictions on the use of violence with the detainees, noting that the Supreme rule was not clear and unequivocal enough, which led to open a wide margin of interpretations and thus to expand acts of torture and added, "so turned to the Supreme Court a mere rubber stamp." The report asked the government to intervene in order to stop acts of torture and called for closer investigation of video and wonder : from guarding the guards always lose accountability? In commenting on the report said the mouthpiece of the Ministry of elimination that the Israeli biased and not based of a representative sample, noting that the possibility of examining the accusations seriously because the complainants Mahjoubi identity. Manufacturer : Israel tortures worse than Guantanamo and Abu Ghraib (Jazeera Net) legitimize the crimes after his deputy counsel asked the manufacturer to the report by saying that the torture in detention Israel is worse than Guantanamo detainees, Abu Ghraib, pointing out that they are away from the camera media. He said the manufacturer of the island indicated that the Israeli Supreme Court began allowing torture means "shaking" and the practice of so-called "unreasonable pressure" and allowed the Shabak continue to commit crimes, and added, "It determines the reasonableness of this or that pressure?." The manufacturer of Red Cross and international bodies to carry out its tasks, indicating his intention to visit some prisons to collect testimonies and presented in the Knesset, attacked the Ministry of eliminating ignored serious charges.
Posted by newsclock at 5:49 PM 1 comments